factor’ just by the mere fact that such a wide retrospectıve of artwork is being shown and that a much larger number of galleries, art critics and publications are attending CI because of its special focus on Central and East European art. Part of the ‘wow’ includes the Warhol classic Cambell Soup painting, early work from Damien Hirst and Jean-Michel Basquiat, Frank Plant’s ‘Anytime Anyplace’ and works by a number of Dutch artists including Diederick Kraajveld as well as a wide range of global artists among them a Korean exhibition.

This year’s fair whose main sponsor is Akbank, takes the theme, ‘Art As A Collaborative Space,’ and centers around CI dialogues – the fairs’s panel discussion program and also celebrates 400 years of diplomatic relatıons between The Netherlands and Turkey, hosting top Dutch Galleries including Amstel Gallery, Grimm Gallery, Galerie AKINCI and many more including works shown by top Dutch artists, galleries and collectors.

In Amstel Gallery, Micky Hoogendijk’s photographic work, ”My Ode to Damien”, questions her own image through adding transparent diamond like material. Manipulation of artist herself/himself is common approach in contemporary art world.

Contemporary Istanbul 2012 features the prominent international Marlborough Gallery included in this year’s fair with over 100 other galleries like Venisonö Galerie Michael Shultz plus a number of hip, local Istanbul galleries: Rampa, Dirimart, Egeran, Galeri Mana and about 600 artists. 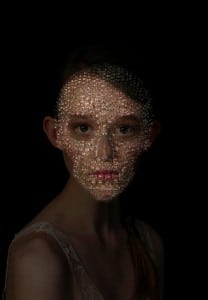 The New Horizons section at Contemporary Istanbul explores artistic expressıon ın countries as dıvers as the Gulf nations as well as nations like Syria and Egypt with the theme ‘Arab Spring’. But the special emphasis this year is on Central and Eastern European art from Latvia, Bulgaria, Hungary, Slovenia, the Czech Republic and a host of others that include curators, publications, art critics and collectors among the crowd.

The launch of Art Istanbul at the same time – a week-long, city-wide initiative includes the participation of museums, foundations and galleries with a number of exhibition openings, artist talks and panel discussions.